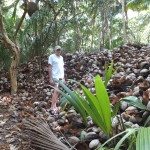 Trees have returned and coconut production is witnessed by this huge pile of husks.

A recent trip to Puerto Rico re-enforced some of the things we are doing right in sustainability and things we need to work on.

When friends found out we were headed for Puerto Rico we got questions like; Why go there?  What kind of weapons are you taking with you?  Aren’t  you concerned about crime there?  I did check on crime statistics and the murder rate there is similar to the murder rate in Washington D.C.  And in Puerto Rico there is an unwritten rule that neither the police or the drug dealers will allow shooting of tourists.

What we found in Puerto Rico were very friendly people, nearly empty miles of beach on week days, lots of local produce and lots of opportunity for outdoor activities. 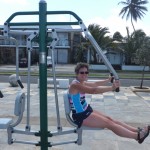 One town had outdoor exercise equipment installed by the ocean front.

We also met people who were interested in what we were doing in sustainability in the U.S. and wanted to show us what they were doing!

Puerto Rico has had a receding economy for some time. it is losing some of it’s industrial base, people are leaving to find employment elsewhere and many of the downtowns have empty buildings.  Yet there are many things that make Puerto Rico appear more prosperous than it really is – Kind of like here!  The roads are clogged with very nice cars.  One of our hosts explained that people skip meals to buy a car because it is a status symbol.  There was an over-abundance of fast food outlets and of course everyone had a smart phone. 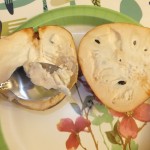 Corazon (From the Annona genus)
tasted like sweet custard and came from a tree in the yard where we stayed.

This begs the question; can a sustainable society be so focused on consumable products and services? Here is what Puerto Ricans were doing to achieve sustainability:

– Small Houses:  One of  our hosts, Milton,built a small house to rent out to visitors.  It was 12 feet by 24 feet that included a small front porch and loft. Another host, Piero, converted the family house to small rental apartments for visitors.  The contemporary furnishings made the place very modern feeling.  Both places came complete with kitchen, bath, bed and furniture.  And they were comfortable!  Some real thought went into these places.  In Piero’s case this allowed him to keep the family home and in both cases allowed the owner to increase the value of their properties.  Both of these owners also lived on the property. 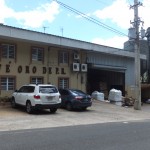 Coffee growing and production is occurring inland in Puerto Rico.

– Growing At Home: Not surprisingly our hosts with small homes also were growing edible or usable plants on  their properties too.  Piero was an easy going personality when it came to his landscape and was doing a little at a time, but had a variety of fruit producing trees including cocoa.  He also had a large ficus tree (only 35 years old!) that shaded our entire apartment negating the need for air conditioning. Oops! I forgot to tell you the electrical rate is double what it is here. Milton had a more perfectionist personality and kept a very neat yard and his fruit trees were carefully placed and orderly.  I suggested to him another planting area where he could use the fallen leaves for mulch instead of having to bag them up.  Before I left Milton showed me where he was going to install an outdoor shower to reuse water for plants.

– Small Agriculture:  After hundreds of years of damaging commodity agriculture, mostly sugar cane, the forests are reemerging as the dominate land form in Puerto Rico.  It is hard to image today that almost the whole island was denuded and people impoverished with back breaking work in producing something that had no lasting value.  Small fruit and coffee agriculture now dominates.  Organic and local agriculture is apparent in local markets and road side stands.  Small grass fed dairy cow and beef operations exist and further reinforce that perennial crops-not annual crops-are the sustainable, low maintenance option. 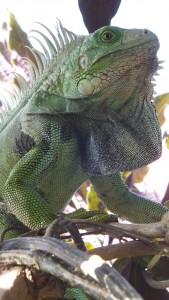 Large Iguanas were everywhere. A Puerto Rico company harvests this invasive species and sells the meat! 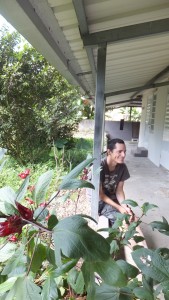 Piero was growing this Roselle for juice as well as other edibles at his “Bright Temple” apartment where we stayed.

Thanks for shopping with us!